Cooper came in with his mom, dad, and sister to the radiothon today to give us an interview and tell us a little bit about himself.

Cooper is a 6-year-old in the first grade. He has one sister and two dogs. e loves school, and being outside. Cooper was in Primary Children’s Hospital because he has microtia. Microtia is an underdevelopment of the external ear and closure or absence of the external auditory ear canal.

Cooper was 5 when the doctors started to build him a new ear His first surgery left him staying at primary children’s for a week. He had to be convinced to leave the hospital because they were taking such good care of him. Cooper has had three surgeries and now has a new ear that he can hear out of. 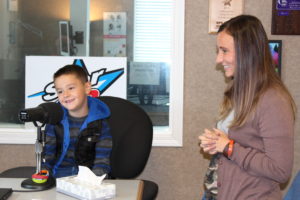